The Ghost Sheep at Collie

Here’s an example of a Ghost Story created for a site specific performance using existing historical elements. The town of Collie now has a NEW GHOST! 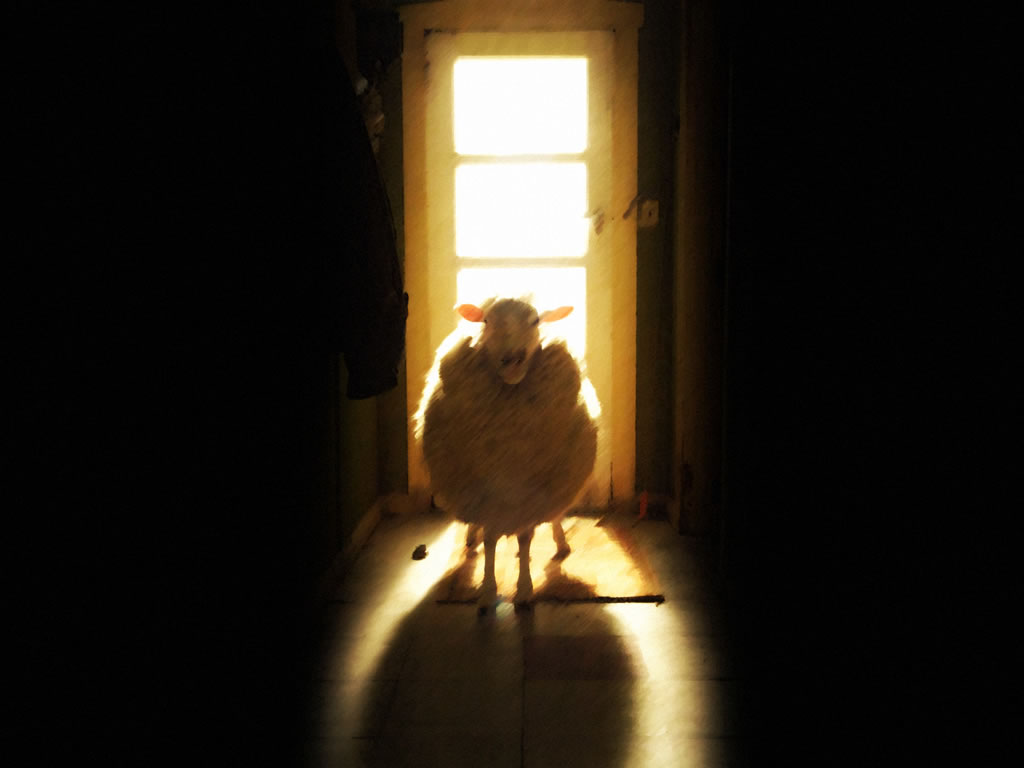 Lieutenant Surgeon Alexander Collie, RN, as you know, named the Collie River, on an expedition in 1829, and after this nothing much passed this way for the next fifty years, except sheep, and the shepherds who tended them.

The name Collie for the settlement was settled in 1887, but the railway station was first called Coalville, then Colliefields, and lastly Collie in 1899. The first train to run along the new branch spur from Brunswick junction arrived late in 1898, and the train driver, Mr. Brennan, may have made the first sighting of a Ghost in Collie.

As the train ran down the slope from Allanson, he says, he saw a mob of sheep on the track, accompanied by an old shepherd, yet the blast of the train whistle brought no reaction from either sheep or man, and he felt sure he must have run down several of the sheep. The train running too fast to stop then, he reported the accident to the stationmaster. On the return journey in the early evening, he looked out for blood on the tracks, or signs of the carnage, but saw neither dead sheep, nor any sign or trace of them.

On January 12th, 1906, a train coming into Collie from the Lucknow Timber Concession ran out of control when the steam regulator failed, eventually jumping the rails at the Harvey Street crossing, with one person killed leaping from the speeding train. The driver and guard both stayed with the train, until it stopped, receiving only a severe shaking, and both reported seeing sheep on the track before the mechanical failure.

On the night of the great fire in Throssell Street in 1914, which burned all the shops on either side of the Federal Hotel, sheep were reportedly heard and seen in the distance against the pall of smoke. So, why would Collie have Ghost Sheep? The answer may be part of the story of the discovery of Coal in Collie.

The area now occupied by the town was farmed in the 1880s by Arthur Perrin of Brunswick, who had in his employ a shepherd named George Marsh, who ranged over this area with several hundred sheep. The story goes that George was making camp one evening and sat his billy to boil resting on some black stones, which eventually caught fire and by morning were turned to ash. When he reported this to Arthur Perrin on his monthly visit with provisions, Perrin scoffed at the notion, declaring it was well known there was no coal anywhere near the Collie River. Nevertheless, the story goes, he went walking by the river, and whenever Perrin saw lumps of anything that looked like Coal, he threw it in the river, determined to keep the secret for himself. He made at least one visit to Perth, to see Alexander Forrest, Minister for Lands and Minerals, who was absent, or too busy too see him, or listen to his story.

In 1889, Perrin became very sick, and convinced he was about to die, he called his brother John to his bedside, and confided the secret he had kept for so long. Arthur recovered, but his brother was not so good at keeping secrets, and on a visit to Bunbury made a drunken boast of the potential fortune buried on his brothers farm. He was overheard by a sharp Bunbury businessman, David Hay, who ventured that in exchange for the location of the Coal, he would pay all expenses incurred with registering the mining lease at Perth , and make both men rich.

In October 1889 Arthur Perrin, David Hay, and one of Hays associates, a Mr. Dixon, traveled to Perth, and duly registered a claim of three hundred acres over the selected area in the joint names of Hay and Perrin. Without Perrins knowledge, Hay and Dixon proceeded to register another dozen claims of similar size surrounding the original. The rest, as they say, is history. The coal proved plentiful and of sufficient quality and quantity to make a commercial venture and gave rise to the many mines which led to the growth and development of Collie.

Hay and Perrin shared a reward of One thousand pounds, a considerable sum, previously posted by the State Government for the discovery of winnable Coal in WA. George Marsh, the man who actually picked up the first pieces of coal, received no part in the reward.

Hay and Perrin began digging the first test shafts, some of which flooded, and Marsh complained that some sheep were falling in these pits and drowning. He also brought to Perrins attention a rumour he’d heard (Marsh could not read a newspaper) about a reward for the discovery of the coal, and wanted to know if he would get it. At some point Marsh disappeared, and his sheep were found, said Perrin, wandering near the pits, unattended.

The last recorded appearance of the Ghost sheep was in 1965, when the Hebe mine near Muja flooded after the working face struck a large aquifer. The mine filled quickly, and in the scramble to escape the rising water, much equipment was sacrificed. Ron Edwards, a new arrival at the Hebe, was cut off from his workmates and the main drive by the rising water, and when the mines electric lights failed, he was lost in the dark tunnels with only his miners helmet lamp to light his way. In the great confusion of the miners escape, it was over an hour after the emergency was sounded before Edwards was missed.

Deep in the mine, Edwards later reported, he heard over the sound of the rushing waters, the bleating of Sheep echoing along the tunnels, and it was this sound he followed to a ventilation shaft, through which he eventually escaped. Despite Edwards assertions that it was the sound of the Sheep that led him out, and a search being made of the area, no sheep were found.

Could it be that a mob of Ghostly Sheep and their Spectral Shepherd like to make their presence felt in Collie at times of danger, or is the ghost of George Marsh still pressing for recognition as the first man to discover Coal at Collie?

To have Glenn recite from his vast collection of stories, or to have one tailored for your own special occasion:

or Send an email:

Glenn B Swift – Western Australia’s most in demand storyteller and the first choice of Children’s Specialist Librarians from Albany to Broome.

Equally at home in a school, library, theatre or as an after-dinner speaker, Glenn's tailored programmes are suitable for all occasions – Christmas, Halloween, Easter and local themes and events.

Glenn’s exuberant performance style means audience numbers of 100 or more are no problem at all.